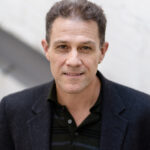 Christian Baskous’ many audiobooks include titles by Jim Harrison, Devin Murphy, Charles Bukowski, Ben Fountain, Mitch Albom, James Rollins, Jim Fergus and many others, for Harper Audio, Blackstone, BBC Audiobooks America, McMillan, Audible, Penguin Audio and other publishers…. Highlights include eight of Charles Bukowski’s full-length works including “Ham on Rye”, “Post Office” and “Hollywood”. Richard Ford’s “Between Them”, was one of AudioFile Magazine’s “Best Audiobooks of 2017”. Christian Baskous’ work has been nominated for Audie awards and won a number of Headphones Awards. Recent books include the last seven of James Rollins’ Sigma thrillers including his collection UNRESTRICTED ACCESS and the novel THE LAST ODYSSEY (from Harper Audio), four books by the Canadian author Richard Wagamese (from Blackstone). Coming soon: Jim Harrisons’s THE ROAD HOME and SUNDOG.

Christian Baskous graduated from Juilliard (Group 12), spending a couple of years before that at the Pacific Conservatory of the Performing Arts. He is a lifetime member of The Actors Studio.